The Sound and Light Cinematic Duo thanks Yury Morozov and The Center of Jewish Education in Ukraine for their input into the project.

The unique collection contains some of the earliest cinematic representations of east European Jewish communities and more. Black and White silent films as early as 1910 depict the Jews of Ukraine and their daily lives in both narrative and documentary forms. Many of these films have never been seen outside of Ukraine and some have not been screened for over 80 years. 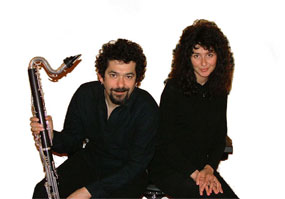 Merlin and Polina Shepherd represent two nations although their families come from very close geographical locations. At the end of the 19th Century, Merlin’s great-grandparents emigrated from Ukraine and Romania to escape pogroms and seek a better world in the west. Polina’s grandparents escaped from the Sho’ah (Holocaust) by fleeing from Kiev/Odessa to Siberia. The different and yet vital sustenance of his western Jewish upbringing and her eastern one have brought them to a unique closeness in musical, creative and spiritual terms.

Their playing acts as the perfect foil for these amazing historic documents. With their deep training, musical experience and by using tradition musical pieces and stylistically accurate new compositions, these films are magically brought back to life almost a century after their first screenings.

By transportation backwards in time with this historically accurate visual and aural experience, these two world class musicians bring their audiences forward to a deeper understanding of present and latter day Yiddishkeit.