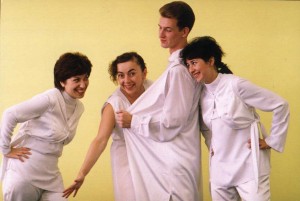 A new direction for Yiddish music.

Sing out! The Folksong magazine

… here and there we hear a classical vocal style, something more operatic, or a flourish of a music theatre. Instrumental styles are just as varied: Jewish musical modes weave together with a klezmer–sounding clarinet, jazz–style saxophone and bass or rock guitar. All of the musicians are excellent.

The Vocal quartet Ashkenazim sing Jewish music a cappella and also perform with ensembles and orchestras. Their repertoire mostly consists of Polina Shepherd’s original compositions for Yiddish poems, folk songs in Yiddish, klezmer music, niggunim (wordless songs).
Although modern in its musical principles, the quartet are aiming for a folk sound. A special manner of performing, traditional instrumental styles copied by the voices, form the unique Ashkenazim style. A style which is recognisable from the first few bars. Since their beginning in 2001 they’ve performed in dozens of cities of the Former Soviet Union, USA, Canada and Europe, and recorded 3 CDs: Di Yidishe Gas (2001), Fun Yener Zayt Lid (2003) and Baym Taykh (2006).

One thought on “ashkenazim”