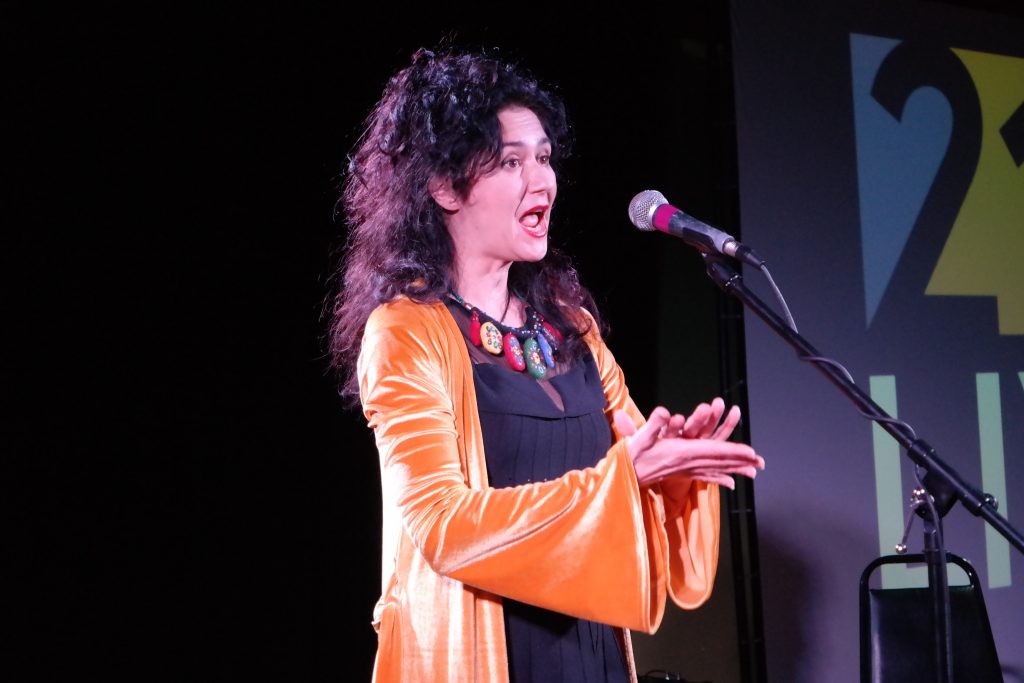 'The Robert Plant of klezmer'   -  Seth Rogovoy, The Essential Klezmer

Polina Shepherd was born in Siberia and grew up in a home where songs were regularly sung at a family table. Now an internationally renowned singer, she brings the songs of the Steppes and the Shtetl up to date with passion and haunting soul. Her singing, though based on traditional forms, cuts a sound deeply rooted in east European Jewish and Russian folk. Growing up in Tatarstan also placed her close to Islamic ornamentation and timbre, which can be heard in her unique vocal style and four-octave range.

Whilst living in Kazan (capital of Tatarstan) and studying at the State Academy, Polina joined Russia′s first klezmer band after Perestroika, Simcha (1990-2000). She soon became the principal Yiddish choir leader of the former Soviet Union, composing original material for large groups of voices and touring internationally with her Quartet Ashkenazim (1991-2007).

The latest and so far most ambitious project is 150 Voices, a recorded collaboration between Polina, the lead singer of the Grammy Award-winning Klezmatics Lorin Sklamberg and choirs in the UK and the USA (CD 150 Voices, 2020). It explores the connection between the Steppes and the Shtetl through folk and art songs, arranged specifically for this project, and newly composed originals. Apart from the original choirs, the Sklamberg – Shepherd Duo offer workshopping and performing it with any group choir in the world.

Amongst her Polina’s other collaborative projects is Sklamberg & The Shepherds which brings the world of traditional and newly composed Yiddish and Russian song blended with Klezmer and southern Mediterranean Music.

As s solo performer she presents a variety of original songs including her solo album Three Centuries Ago in Russian and Yiddish, all the songs in Russian composed to her own poetry. As a vocalist worked and recorded with a remix artist Max Pashm in Never Mind the Balkans, a Romanian Gypsy style brass band Fanfara, to name a couple…

As a pianist she works with the Sound & Light Cinematic Duo (UK), who play live accompaniment to black & white silent films from 1910-1930, also was the original keyboards player in The Yiddish Twist Orchestra.

Her latest duo projects are The Stranniki with a “wandering scholar” Psoy Korolenko (Russia/US), (2016) and an all-new Russian-Yiddish song programme with a Grammy-winning New-Yorker Lorin Sklamberg, The Izba, the Shtibl and the Global Village.

Her choir work is united by the umbrella of The Polina Shepherd Vocal Experience and covers many aspects of vocal music from large scale choirs to smaller chamber groups, from highly arranged and conducted pieces to on spot choral improvisation. Choir leader of the Award Winning Russian choir of Brighton & Hove since 2007, The London Yiddish choir and The London Russian Choir since 2013 and Brighton & Hove Yiddish choir since 2015. During the pandemic in 2020 Polina organised online Sing With Me singing sessions with up to 90 participants from all parts of the globe and run 70 sessions over the spring and summer months, now continuing with the classes.

Yiddish Music adviser for a theatre show production Paul, strange Kind of a Hero in Brighton UK by Goodcompanymedia, April 2007. Music Director and composer at Coventry Belgrade Theatre for the production of Marriage by N. Gogol, 2013. About 100 compositions including music for theatre shows and choir compositions are performed by soloists and choirs all over the world.

Programme director for International Klezmer Music Festival and Seminar in Moscow in 2005 and 2006, the International Festival of Jewish Culture and the Competition of Jewish musicians in Kazan, Russia in 2002 and 2003, Klezmer South in Brighton, UK in 2018 & 2019.