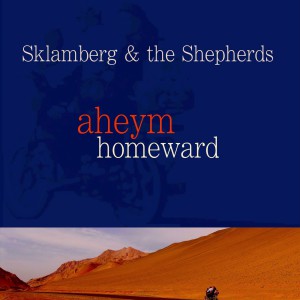 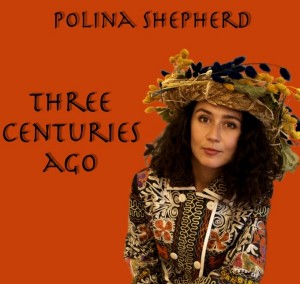 Polina Shepherd’s first solo CD brings us 10 new songs in Russian and Yiddish and – by popular demand appearing as a bonus track, one of the traditional prayer songs Avinu Malkenu. Accompanied by brilliant improvisers Rohan Kriwazcek on The Saddest Bagpipes in the World and Merlin Shepherd on saxophone, clarinet, bass and percussion. read more
A Blade of Grass 2012  Sold out 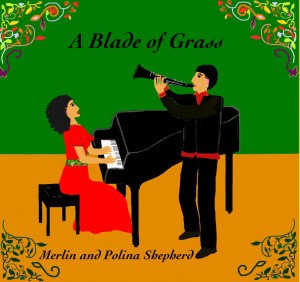 Merlin & Polina Shepherd Original compositions drawing cultural and musical influences from Tatarstan, Turkey, Russia and the Pale of Settlement.  Playing Music from several linked cultures and maintaining the styles, they also incorporate improvisation, freedom and spontaneity…. read more
Civilisation sold out!
Download version: pay £6 and we will send you a Dropbox link to the songs, CD cover and song texts 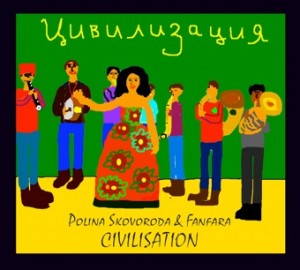 Polina Skovoroda & Fanfara CD is a collaboration that is special and exciting. Under Polina’s guest direction, the Brighton based group mix their Romanian Gypsy Brass tunes with new material that pushes the boundaries of traditional Russian and Yiddish song. From the opening track, Igrai Truba (Play Trumpet) we hear Polina’s improvised, weaving and fluid vocal style coming head on with the powerful sustained brass chords, then leading to a fast, pulsing, astonishingly danceable Russian song, tasting like the best Romanian slivovitz…read more 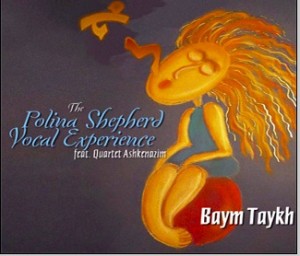 This CD, the Quartet Ashkenazim’s fourth recording contains all original compositions with 11 poems by Yiddish writers, two from folklore and one wordless. The diversity of musical expression far surpassing all their previous works. Drawing from a large variety of Poets and a great variety of subjects Polina Shepherd creates a world where all is other and yet all is strangely familiar… read more

Listen to the CD on Soundcloud 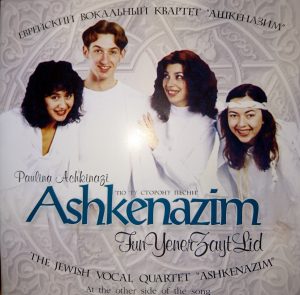 Sometimes the Universe speaks Yiddish. National culture as a reflection of the depth and all common to all mankind, mystical and metaphorical. Jewish features are always present in the creative work of the Ashkenazim as much as the Universal Truth is part of everyone of us: it bursts forth as a musical image from composer P. Achkinazi–Shepherd, it breathes with improvisations and laughter of musicians and cries with the tears of the audience… read more

Listen to some tracks on SoundCloud

This CD was recorded in Kazan, Tatarstan, Russia in 2000 and was the first step of the vocal quartet into Yiddish music. With very little access and almost now knowledge of Ashkenazi culture,the singers were discovering their heritage and just getting into the repertoire.

Nevertheless, as one of the first emerging FSU “Klezmer Revival” projects, this recording already has something to say and was complimented by Frank London (New York) as “A remarkable group that is at the forefront of Jewish a capella singing.”

Only in a couple of years time, the vocal quartet Ashkenazim, having gone through intense learning and changes in personnel, was touring Europe and the US with their new Yiddish music, mostly composed by the leader, now composer and performer in the UK, Polina Shepherd. Some tracks are accompanied by Klezmer Ensemble Simkha, Kazan, Tatarstan (leader – Leonid Sontz).