What? The Russian word Stranniki means to us World wanderers, but why wander?… You and I, your folks and mine, us human souls, pilgrims of continents and witnesses of time? In the 21 century?… Why? Don’t we have the internet at home?

Psoy and Polina  have both been at the forefront of the international Ashkenazi music scene for many years. After a mini tour in NY in 2015 & a show at the conference Mediating a New Cold War in the Digital Age at Dartmouth College in 2016, the duo toured the USA from Washington CD to LA in December 2017, Russia, more USA and Canada 2018 with a programme Shlepping the Steppes and the Shtetl.

This collaboration defines original & fresh repertoire based on their original Yiddish and Russian songs as well as multilingual interpretations & translations. They create a balance between serious listening and popular music, avant-garde & classics, folklore, chamber music, theater song & cabaret, reflecting the multi-cultural and international nature of diverse world & Jewish cultures. Rooted in Russian and Yiddish folk, their multilingual journey starts in the Steppes and the Shtetl, then takes us to the new world and other planets. 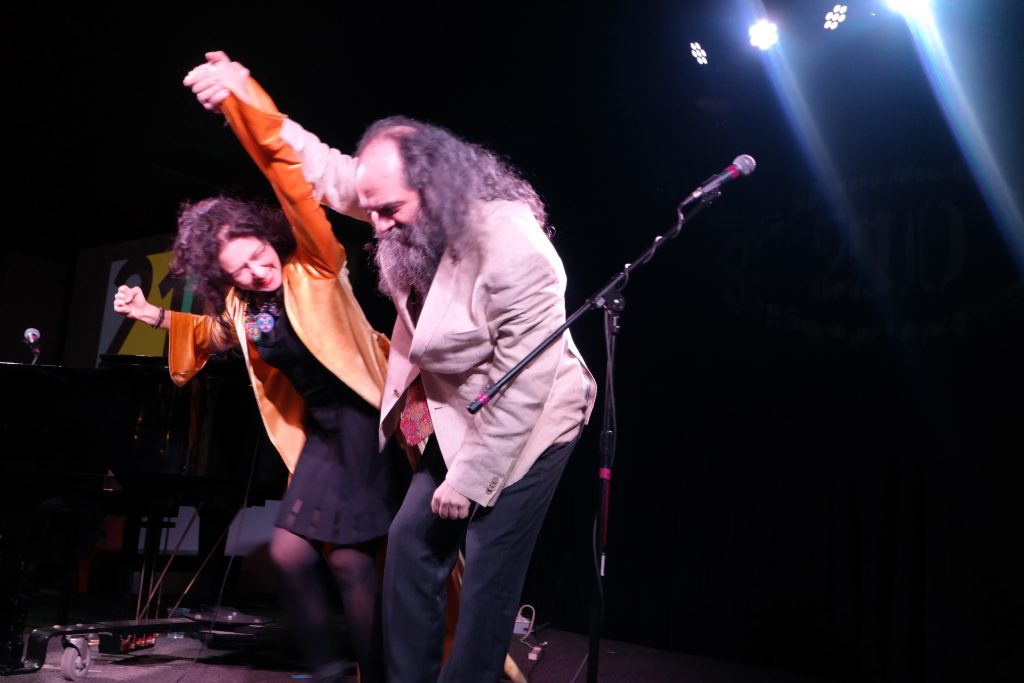 Pavel Lion, a.k.a. Psoy Korolenko, is a Moscow based singer/songwriter, translator, scholar and journalist. Picture a jetlagged Allen Ginsberg hopped up on a double espresso: a polyglot people-pleaser, a born performer, a half-serious shaman…. a practitioner of what he calls “spell art,” which is to say art that casts a spell on its befuddled, bemused, blissed-out audience. (“Forward”).

He has been referred to as a ''wandering scholar'' and an ''avant-bard''. His multilingual one-person cabaret-esque show balances folk and klezmer music, free-style poetry and intellectual comedy. Psoy writes and sings in English, Russian, Yiddish, and French.
On stage since 2000, he has published one book of selected essays and song lyrics ''The Hit Of The Century'', and 14 CDs – some of them in collaboration with active Jewish and Klezmer musicians ("Opa!", Daniel Kahn, Igor Krutogolov, "Oy Division").
Psoy is a member of the organizing committee for a Russian American music festival JetLAG, a guest of many klezmer music festivals, and an ex-artist in residence at the Trinity College (Hartford), University of Michigan (Ann Arbor), Dickinson College (Carlisle, PA). An author of insightful and sophisticated Russian sung poetry, Psoy is also known for his keen and explorative vision of the art of translation, “tradaptation” and what he calls Spell-Art (i.e. playing with foreign text, emphasizing linguistic distances, multilingual songs etc).

POLINA SHEPHERD (vocals, piano):
“The Robert Plant of klezmer” (Seth Rogovoy, The Essential Klezmer), performs an explosive mixture of songs of the Steppes and the Shtetl spiced up by Tatar Bazaars and washed down with an Odessa fisherman’s tune: Russian and Yiddish, folklore and fakelore, the powerful and the profound.